This page explains how to generate the FPGA bitstream implementing bigPULP, i.e., the PMCA used in HERO, using Xilinx Vivado.

The following build system was used for this HOWTO:

The following files will be generated throughout this HOWTO:

to clone the bigPULP GIT repository into your local workspace directory. Execute

to enter the project folder and download all required IP cores, solve dependencies and generate the scripts including all required source files in Xilinx Vivado.

and source your Vivado environment.

From IP cores to FPGA bitstream

After having downloaded the PULP IP cores, having set up and sourced the sourceme.sh script, and having sourced the Xilinx Vivado environment, the actual generation of the FPGA configuration can be started.

This whole procedure can be grouped into three main steps:

Most of the IP cores inside bigPULP are open-source IPs from the PULP plaform on GitHub. However, there are a few blocks, such as the clock manager and the mailbox (the red blocks in the figures below), which are implemented using Xilinx IP cores.

These need to be generated before the synthesis of the PULP cluster and the SoC can be started. To this end, execute

After having generated the Xilinx IP cores, the synthesis of the bigPULP can be started. This task is done in two steps. First, execute

to synthesize the PULP cluster. The produced netlist is then used to generate PULP SoC. As shown in the figure below, th PULP SoC can instantiate one or multiple clusters. 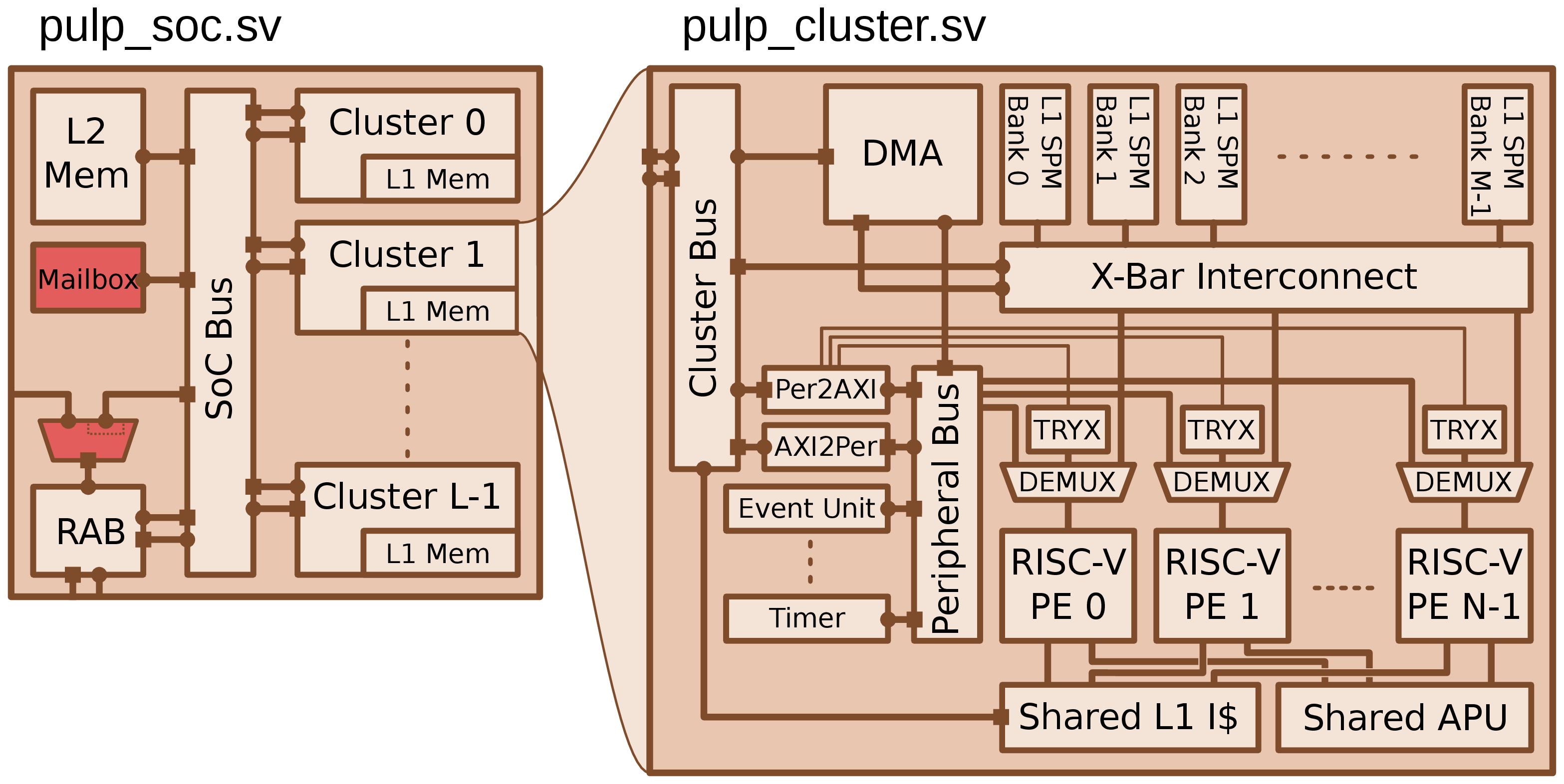 Once the netlist of the PULP SoC has been generated, the top-level design including the PULP SoC and the host interfaces can be synthesized and the FPGA bitstream generated. Depending on the selected FPGA platform, a different top-level project is used.

For the designs based on the Xilinx Zynq-7000 All-Programmable SoC, the bigpulp-z-70xx project is used.

to enter the project folder, start Xilinx Vivado, synthesize the top-level netlist and and generate the FPGA bitstream.

An overview of the top-level design is given in the figure below. 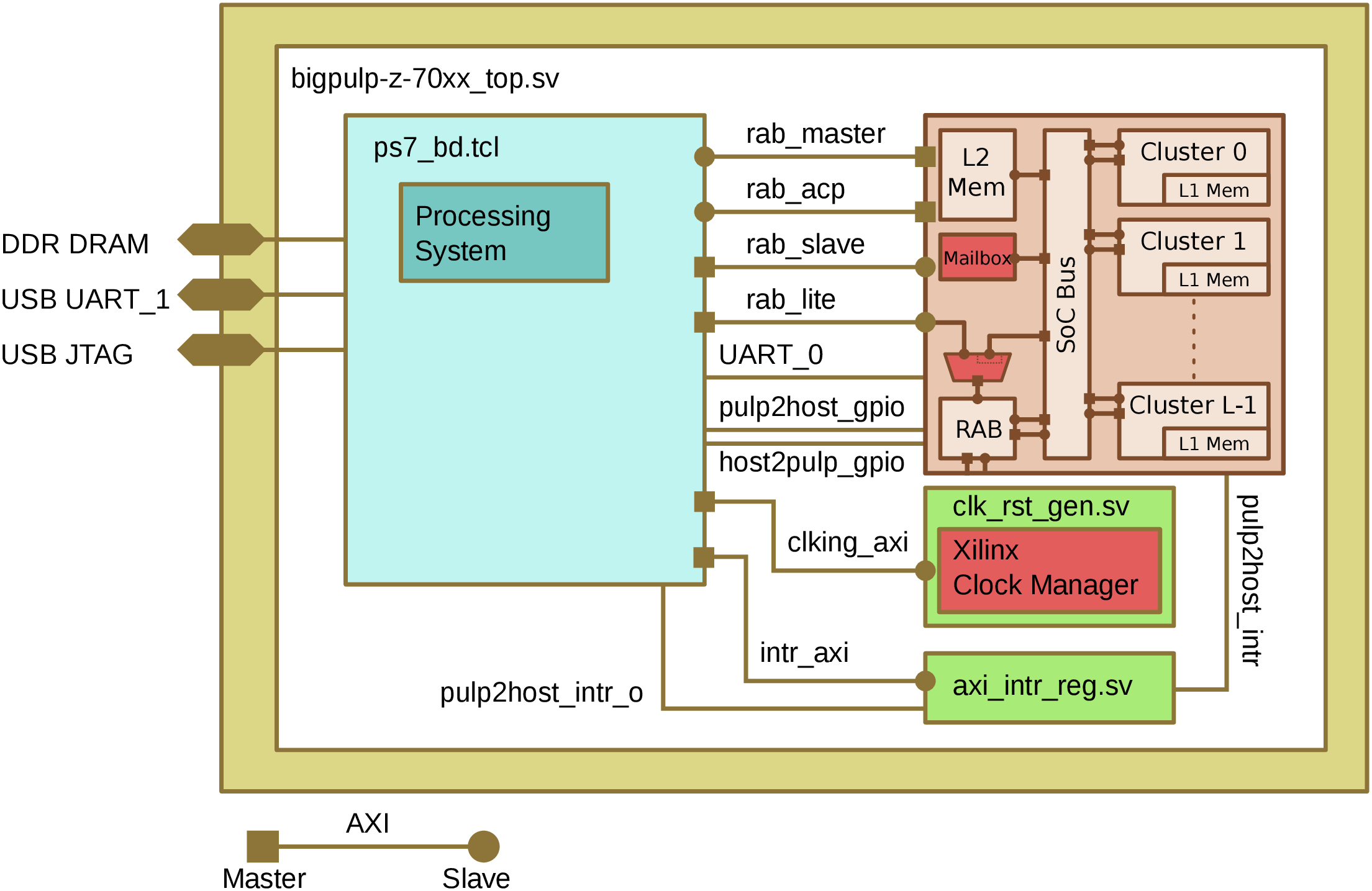 On the Zynq-based platform, the output generated by printf() on bigPULP are sent to the UART_0 UART interface of the host. The UART_1 interface connects to the USB UART chip on the board and is used to interface the host with a workstation. The USB JTAG connection of the Zynq can be used to debug the system without interfering with the Linux system running on the host.

If you target another FPGA platform, a different top-level project must be used.

The figure below shows the top-level design for bigpulp-zux, i.e., when targeting the Xilinx Zynq UltraScale+ MPSoC. 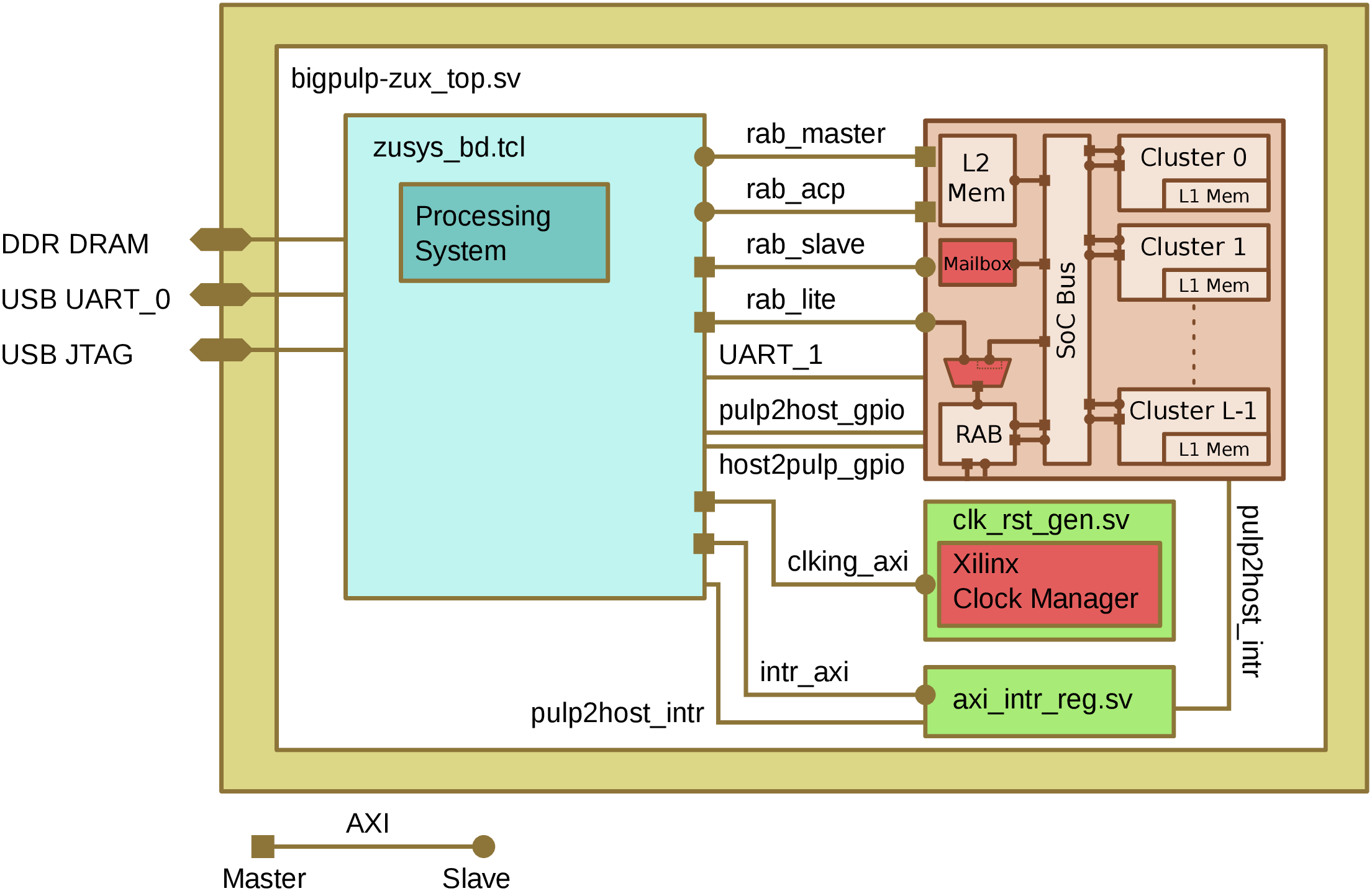 The figure below shows the top-level design for bigpulp, i.e., when targeting the Juno ARM Development Platform. 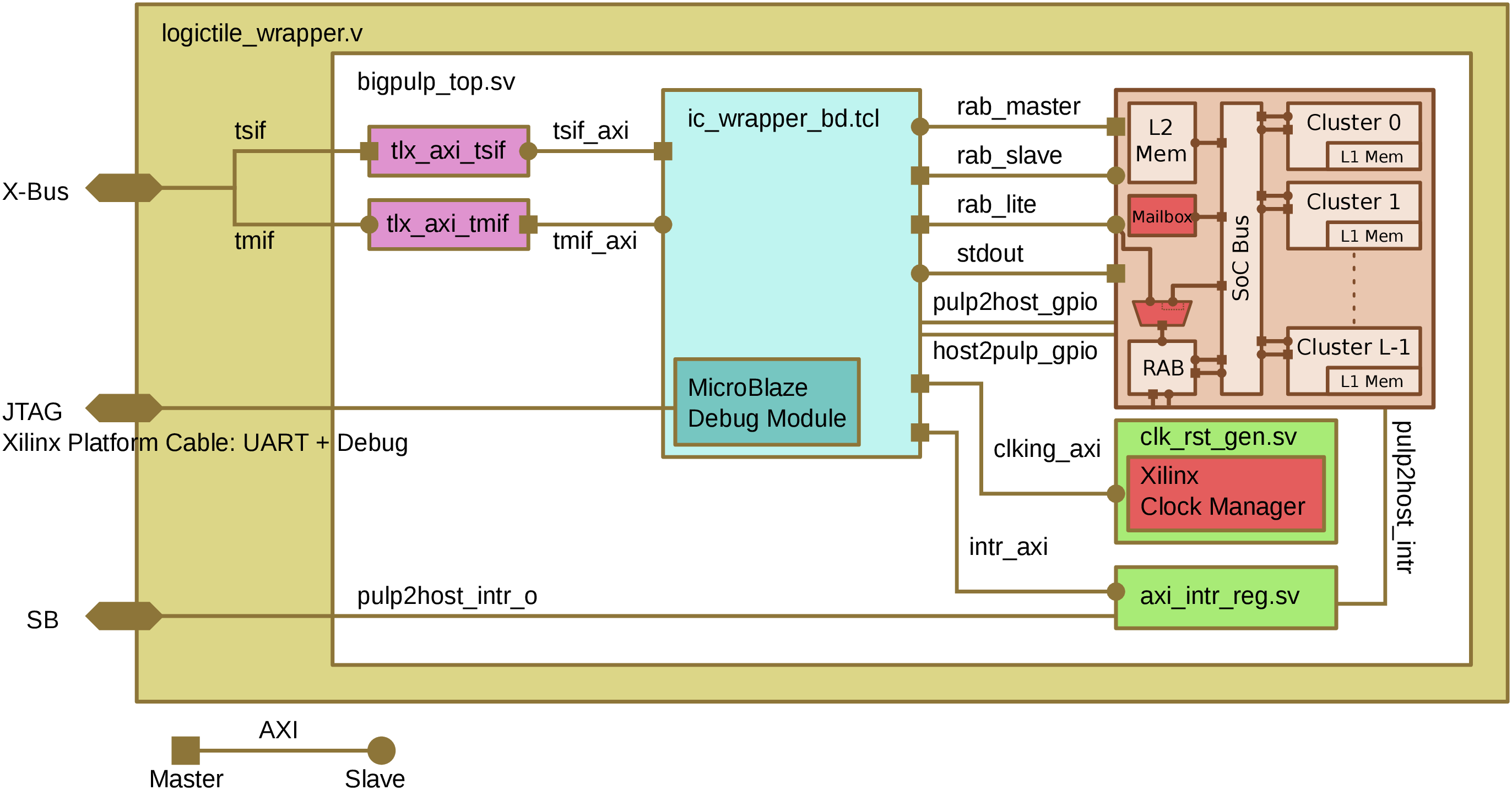 Compared to the other top-level designs, there are a couple of differences.

NOTE: The two .dcp blackbox netlists for the Thin-Link converters as well as the top-level wrapper logictile_wrapper.v are available only directly from ARM and cannot be redistributed. For internal development, download the juno-supportrepository from the internal GitLab server and configure JUNO_SUPPORT_PATH in sourceme.sh accordingly.

Once the bitstream and hardware definition file have been generated, they can be used to generate the host software.