This page explains how to build and configure the host Linux system for HERO consisting of a Linaro Linux kernel and an OpenEmbedded root filesystem. This HOWTO is for HERO based on the Juno ARM Development Platform (ADP). We refer to this flow as the JunoLinux flow.

The specific platform used for this HOWTO is the Juno ARM Development Platform (ADP).

The build flow consists of three separate sets of components:

NOTE: As of Linaro Release 17.01, the OpenEmbedded root filesystem can no longer be configured and compiled from the sources as ARM and Linaro do no longer provide the required build environment, scripts and Juno-related Yocto layers. Instead, a pre-compiled root filesystem image must be used which is automatically downloaded by the setup script of this HOWTO. This prevents using features such as multilib support (not enabled by default in OpenEmbedded) but allows to use more recent kernel versions.

NOTE: The following table gives an overview on which Linaro releases are supported by this howto, and which configuration requires which Linaro manifest and which GCC version, and then leads to which Linux kernel version and OpenEmbedded root filesystem. The Linaro release version is configured in the env.sh script (see Project Setup). By default, Linaro Release 16.03 is built by this HOWTO.

The following systems were used for this HOWTO:

The following files are required for this HOWTO:

The following files will be generated throughout this HOWTO:

To boot the platform, these files need to be copied to the boot partition Juno ADP and the root filesystem image must be deployed on its hard disk.

Create a new workspace directory on your local scratch partition. Throughout this HOWTO, we assume this directory to be

Where ${BOARD} has been set to juno for this HOWTO.

to build up the required directory structure, download the GCC cross compilers inside gcc-linaro, clone the required Linaro GIT repositories, checkout the proper tags, copy the provided helper files to the appropriate directories, and patch the device tree source file for bigPULP.

Navigate to the workspace directory and run

to trigger the build process.

This will generate the Linaro kernel release consisting of the following main output files:

The kernel build directory is

for Linaro Release 16.03 or newer, respectively.

NOTE: the actual kernel configuration .config can also be found in this folder.

The generated output files can also be found under

for Linaro Release 16.03 or newer, respectively. To boot the system, these files need to be copied to the boot partition of the Juno ADP together with the files generated in

This image will need to be deployed on the internal hard/solid-state drive of the Juno ADP.

Deploying the generated or downloaded images on the Juno ADP requires access to and root priviledges on the workstation attached to the serial interfaces of the Juno ADP.

The name of this machine is configured in the JUNO_WORKSTATION_TARGET_HOST variable in the env.sh script.

Further information about how to deploy the images on the Juno ADP can also be found on ARM’s website.

First of all, make sure the variable JUNO_WORKSTATION_TARGET_HOST in the env.sh script is properly configured and

In your workspace. Then, run

to copy the generated or downloaded images as well as a set of helper scripts to this workstation.

NOTE: This step requires root priviledges and if not used carefully, can destroy data on your workstation.

To install the boot files, open two terminals and connect to the workstation

With the first one, execute

and then follow the instructions of the script using the second terminal.

NOTE: This step requires root priviledges and if not used carefully, can destroy data on your workstation.

To deploy a root filesystem image previously generated or downloaded, you need to first power down the Juno ADP and unplug the internal hard/solid-state drive of the Juno ADP. Plug it in to workstation.

to connect to the workstation and start the script for depolying the root filesystem. The script can take several minutes to finish.

Once the script has finished execution, connect the drive back to the Juno ADP and start it. When it is up and running, also execute

to modify and copy the loadable kernel modules generated during Linux kernel compilation from custom_files/lib/modules to the new root filesystem.

Open a new terminal, connect to the Ubuntu workstation attached to the Juno ADP using SSH and then open the serial console of the Juno ADP

and boot the board by typing

into the console. The board is now starting up. It first configures the various FPGAs in the system and then launches the U-Boot bootloader. When you see the U-Boot prompt in the figure below, press any button to interrupt the boot process and enter the U-Boot configuration. 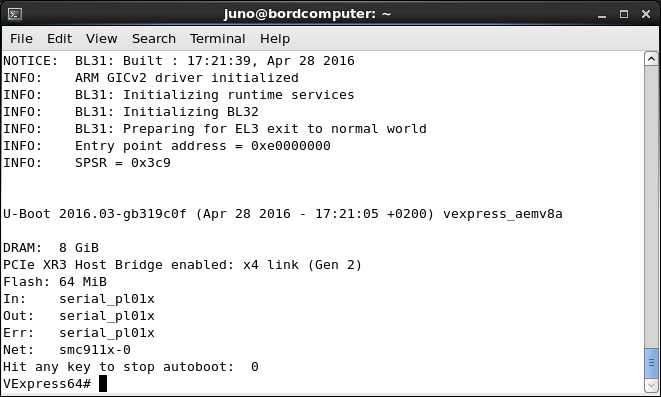 First of all, type

to load the default environment defined in the binary U-Boot image. Otherwise the environment will be loaded from an onboard flash memory. To see all environment variables, you can type printenv. Type

to configure the second ethernet interface and

to make sure the serial terminal is used for stderr, stdin and stdout.

to save the modified environment to the onboard flash and to boot Linux.

First, open 4 terminals on your workstation and use SSH to connect to the Ubuntu workstation connected to the Juno ADP:

With the first two terminals, connect to the UART devices of the Juno board:

in the terminal connected to ttyUSB1. During the Linux boot process, this terminal is taken over by the Linux kernel which will print its log here. The other device ttyUSB0 can then be used to control the board over the MCC, for example to initiate a reboot if the system crashes.

and will be used to launch applications on the ARM host.

The fourth terminal is used to interface the MicroBlaze Debug Module connected through the Xilinx Platform Cable. To do so, set up the environment variables required by the Xilinx SDK and type

and start the JTAG UART terminal

Customization of the Build

This HOWTO comes with scripts to both customize the Linux kernel and the root filesystem (Linaro Release 16.03 and older only).

To customize the kernel, source env.sh to setup the environment and then navigate to the kernel source folder

Make your changes to the kernel configuration, save them and exit menuconfig.

to rebuild the kernel and the device tree, and

to rebuild the kernel modules.

NOTE: This set of steps only applies to OpenEmbedded Releases 16.03 and older.

The previously generated root filesystem image is built according to a default recipe. The OpenEmbedded build system allows to add additional packages if needed. If for example an additional tool is required that is part of BusyBox, the following steps are required.

First of all, open an xterm window on your workstation and navigate workspace directory

and source env.sh to configure the environment. Then navigate to the OpenEmbedded workspace directory

to source the OpenEmbedded environment and launch BusyBox menuconfig. Make your adjustments, save the configuration and exit.

to generate a configuration fragment for the adjustments you just made. Type

to tell OpenEmbedded about the adjustments. Open the file

and remove the string ;subdir=busybox-1.24.1 from the definition of the variable SRC_URI.

to rebuild the root filesystem using the new configuration.

Instead of deploying the new root filesystem image found under openembedded/build/tmp-glibc/deploy/images/genericarmv8/linaro-image-minimal-genericarmv8.tar.gz as a whole (this would destroy any modifications you applied on your existing root filesystem), you can just reinstall the modified BusyBox package. To do so, boot the Juno ADP and copy all the package files generated by OpenEmbedded in openembedded/build/tmp-glibc/deploy/ipk to the Juno ADP. Login to the Juno ADP, navigate to the ipk folder just copied. The BusyBox package can be found inside the aarch64 folder.

to install it using the OPKG Package Manager.

NOTE: In case, OpenEmbedded fails to generate the root filesystem with the modified package, it may help to disable multilib support by removing it from the configuration in openembedded/build/conf/local.conf and openembedded/openembedded-core/build/conf/local.conf. If you do this, you are forced to install the new/modified package using OPKG instead of deploying the entire root filesystem. Otherwise you will loose multilib support.